We rescued Willie and Mannie from the Humane Society of Broward County, a fantastic animal shelter in South Florida. We weren’t looking for cats, in fact after losing our last cat, I said I would never get another one because I was so heart broken. Ok, for this story to make sense, I probably should explain that my husband lives in New York and I live in Florida. It’s not an easy set up, but because of our careers, it’s necessary right now. While we were on vacation, he could sense that being apart I was lonely. He said, it’s been 6 months (since we lost our last cat), you really need to consider looking at getting another cat. I said, “I’m not ready”. Three days after the trip, I was sitting around, watching Real Housewives of whatever city and bored flipping through my phone. I don’t know what came over me, but I decided to check out the Humane Society website to check it out. While scrolling though, what sadly was a lot of pictures of shelter cats, I came across this photo. 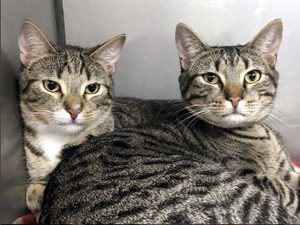 My eyes lit up. Two boy cats that were brothers and were 1 year and 4 months old (on that vacation, I did say I would never get just one cat, it would have to be two that could keep each other company, while still refusing I needed another cat).
I sent the photo to my husband and immediately thought to myself “what am I doing?” He responded within seconds and said, “GO SEE THEM!”. Sigh…. So, the next day I did. I think you can gather where this is going…
I’ve had them for 2 months now, and I am happy to report that I am 100% head over heels in love with them. They have brought so much joy to the house. They have raised my sprits so much and I think this might sound cliché but it’s true that they saved me as much as I saved them. They are my little monsters because they still get into some mischief, but nothing they do changes how happy they make me.
Willie (whiter on his face and has white paws) is a cuddle muffin and loves to plop down on me when he wants to get love. Mannie (more traditional tabby) doesn’t need as much attention, but he is very active and does like his lap time on his terms.
My husband met them on one of his trips home and seeing his interaction with them it’s clear I made a great decision.